Thai Massage (Thai Massage) or Nuad Boran is a treatment based on influences from the cultural spheres and traditions of Indian (Ayurveda), Chinese and Southeast Asian medicine.

It is a massage for healing and relaxing purposes. Similar to the philosophy and working methods of Traditional Chinese Medicine, which is better known in the West, Thai Massage is based on the theory that the body is permeated with Lom or air. This air is inhaled into the lungs and travels through the body via 72,000 pathways called Sen. The masseur manipulates the main Sen lines, each time pressing certain basic points along the path of these lines. This may remind you of other techniques like Shiatsu or Tuina.

Thai Massage is a complete massage, which is applied to the whole body, working from the toes to the head. In the process, toxins are eliminated and the Qi (vital energy) is released to give the patient a feeling of deep peace, both in body and mind.

What is a Thai massage (Futon or Oil) like?

The Thai Massage technique has two modalities: There is the Thai Massage on a futon (special mattress) which has movements coming from yoga. The patient wears comfortable clothes such as pyjamas or cotton clothes and the masseur uses his hands, knees, legs and feet to exert pressure and assist the help stretching of the massage.

There is also Thai Massage with Oil, which is done on a stretcher where the oil is applied directly to the skin.

In all forms of Thai massage, stretching, compression, joint mobilisation and reflex stimulation are combined. In a regular rhythm and in harmony with the breathing of the client and the masseur, the free flow of Lom along the Sen lines is stimulated and unblocked.

When Thai Massage is received regularly, a general improvement of the nervous, respiratory, circulatory, digestive and immune systems is seen. It helps reduce stress and anxiety, releases body tension, improves circulation, increases the level of vital energy and self-esteem. 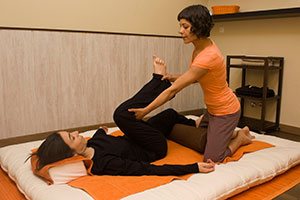 Thai massage is one of the branches of Traditional Thai Medicine, which, just as in China with TCM, is currently recognised and regulated by the government of Thailand, where it is available to the population as a medical discipline for the treatment of a wide variety of ailments. Thai massage has its roots in Chinese Tui Na massage, Indian Yoga and Ayurvedic medicine dating back 4,000 years.

Thai massage can be reminiscent of Yoga or Tai Chi postures, which is why it is also known as Thai yoga massage, Thai bodywork or Thai yoga. It also has a lot in common with Japanese shiatsu.

Thai massage is a thousand-years art of healing that includes a very varied set of delicate techniques and forceful effects. Like all oriental medicines, it is based on the idea of energy flowing through the body through paths known by the Thais as Sen lines. The Chinese call this energy Qi (vital energy), and there are various disciplines and styles that they use to unblock these energy channels called “meridians” (Sen Sib) to allow energy to flow. Like Shiatsu, it is used both preemptively and curatively.

Through its holistic focus, Thai medicine focuses on the prevention of pathologies. As in yoga and other oriental disciplines, Naud Bo’Rarn massage works on the physical body, not as an end in itself, but as an aspect of being a sacred “vehicle”, through which one can reach a more subtle plane: the spirit.

Thai Massage (Thai Massage) or Nuad Boran is a treatment based on influences from the cultural spheres and traditions of Indian (Ayurveda), Chinese and Southeast Asian medicine.

RATES IN SPANISH RATES IN ENGLISH

This website uses cookies to improve your experience while you navigate through the website. Out of these, the cookies that are categorized as necessary are stored on your browser as they are essential for the working of basic functionalities of the website. We also use third-party cookies that help us analyze and understand how you use this website. These cookies will be stored in your browser only with your consent. You also have the option to opt-out of these cookies. But opting out of some of these cookies may affect your browsing experience.
Necessary Always Enabled
Necessary cookies are absolutely essential for the website to function properly. This category only includes cookies that ensures basic functionalities and security features of the website. These cookies do not store any personal information.
Non-necessary
Any cookies that may not be particularly necessary for the website to function and is used specifically to collect user personal data via analytics, ads, other embedded contents are termed as non-necessary cookies. It is mandatory to procure user consent prior to running these cookies on your website.
SAVE & ACCEPT